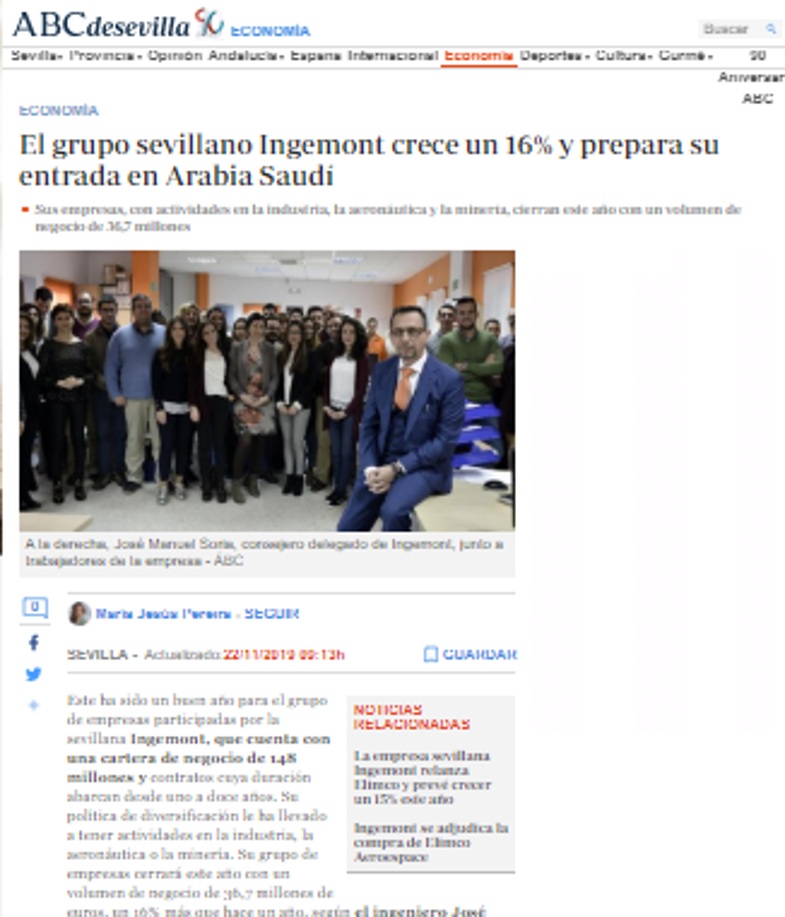 This has been a good year for the group of participated companies headed by Ingemont, which has a business portfolio of 148 million and contracts whose duration ranges between one and twelve years. Its diversification policy has led it to have activities in industry, aeronautics and mining. The group of companies will close this year with a turnover of 36.7 million euros, 16% more than the previous year, according to engineer José Manuel Soria, Ingemont’s majority shareholder and CEO of the company.

A total of 540 people work in the group of participated companies of Ingemont. The company has operational offices in more than 18 Spanish cities. Its 2019-2020 strategic plan includes a shift towards technological and industrial markets based on R&D&I. “That’s why we decided to leave Chile, where we had 70 employees working in high-voltage industrial electrical maintenance,” explains Soria. As part of its growth policy, the company’s international expansion in technological and industrial sectors includes entering Saudi Arabia, France, Italy and Germany.

The group’s parent company is Ingemont Tecnologías, which in turn participates in Ingemont Ingeniería y Servicios Generales, Elimco AeroSpace and Ingeniería Generalistas de Montajes y Mantenimiento (Ingedemo). The parent company, which will have a total turnover of 21 million euros in 2019, has 270 employees and offices in Seville, Huelva, Malaga, Cordoba, Jerez de la Frontera, Algeciras, Melilla, Merida, Badajoz, Illescas, Madrid, Burgos, Pamplona, Gran Canaria and Tenerife. It is dedicated to the development of assembly and maintenance projects of critical facilities, operating in the energy, water and environment, mining and heavy industry, petrochemical and gas, automotive, airport, defense, railway and other sectors…

Ingemont Tecnologías has 400 clients, including Endesa, Enel, REE, Adif, Renfe, Grupo MAS, Aeronnova, Hotusa, Renault and Naturgy. “Two weeks ago, Enel awarded us the recharging points for electric cars in Spain to three suppliers, one of which is us,” says the group’s CEO.

On the other hand, Ingemont bought in 2017 in the Mercantile Court 2 of Seville the company Elimco AeroSpace, which was in receivership. That company was founded by Soria when he was 21 years old and over time he had disassociated himself from it. The firm, which had a turnover of eight million euros in 2016, saw its turnover fall to 4.6 million in 2017, accumulating heavy losses, which forced it to carry out an ERE. Elimco now performs engineering, support and manufacturing work for the aircraft A400M, CN235, A380, A320, A330, A350, C295 and the Tiger and NH90 helicopters. It also carries out aircraft testing, sensorization and system simulators for the MRTT tanker, the Eurofighter 235, the C295, and so on. Elimco’s customers include Airbus D&S, Latelec, Labinal, General Dynamics, Navantia, Leonardo and Esterline.

“Thanks to the hard work of its team, we have been able to grow and consolidate Elimco through the trust placed in it by its customers and the market. We expect to grow this year by over 16% and produce 25% more than in 2017. This year will close with a turnover of €6.3 million, an ebitda of €700,000 and a net result of €200,000. We expect to reach a turnover of 15 million euros by 2022, gradually establishing ourselves in Europe (Toulouse, Hamburg, Munich, Manching and/or Bremen), and in the Middle East, starting with Saudi Arabia,” adds the CEO.

Now that Elimco has raised its head, the firm is working on homologation to be able to work with other companies, such as the Canadian Bombardies, the American Boeing or the Brazilian Embraer.

Its other company, Ingemont Ingeniería y Servicios Generales, with 20 employees, works to service the parent company as well as the market. It has recently been awarded by Enel X an engineering project for Endesa’s installations throughout the country.

On the other hand, the company Ingedemo, with 170 workers and headquarters in Huelva, Algeciras, Madrid and Gerena (Seville), was created in 2017 and has already a turnover of 9 million euros. It is specialized in assembly and mechanical maintenance in mining facilities, oil & gas, industrial plants, airports, thermal power plants, wind and solar parks or hydraulic power plants.

Soria is particularly pleased with the two awards received by Elimco: the Andalucía Excelente Award in the Technological Innovation category and the Airbus “European Best Improver” award for the improvement of its production processes using innovation. Elimco is currently leading four R&D&I projects in Andalusia related to technology, low cost robotized mobile platforms and automation processes.